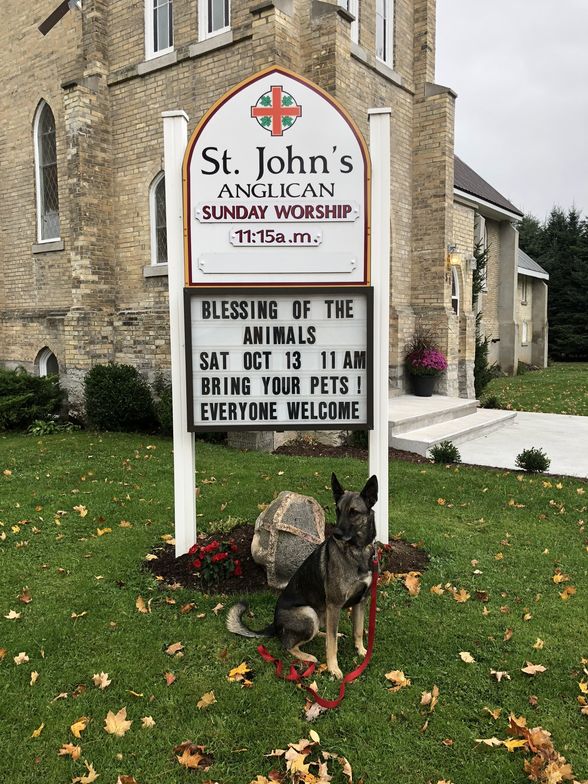 The Parish of St. John’s was born the summer of 1860, though missionaries had been conducting services at the Orange Hall before this time. John Wilton Kerr is credited with founding the church. He was an active lay leader and a prime mover in getting a church building built. He is said to have conducted Anglican services “according to the prayer book pattern.” Lot 109 was donated by John Manning as a church site. A little frame church was built on the corner of Turnberry and Catherine Streets in 1864. By 1875 the congregation had grown and a new larger church was built. It was an Italianate-style building, with paired round-arched windows and a squared corner tower. It was officially opened in August of 1876. In 1947 all but the bell tower was destroyed by fire. The present church was rebuilt in 1948-9. At this time the main entrance through the tower was changed from Turnberry st. to the side street. The building was rededicated July 10, 1949

St. John’s Cemetery is located in pastoral rural area of Morris – Turnberry. It is 3 kilometres west of Brussels Line at 42099 Cranbrook Road. We offer very economical rates for plots and services. Plots are available. We ask you to consider St John’s Cemetery for your or a loved one’s mortal remains. For more information, call 519 440 1035, or by mail care of the church.

Give to St. John's Church, Brussels